Non-Stop: A Turbulent History of Northwest Airlines follows a fabled airline from its first flights in 1926 to its acquisition by Delta Airlines in 2010. Northwest Airlines often soared high in technological savvy, fashion and food sense, wartime achievements, advertising smarts, and business nimbleness. At the same time, it sometimes reached the depths of employee discord, passenger dissatisfaction, and financial bankruptcy. Filled with contradictions and numerous peaks and valleys, Northwest's history offers a telling window into an airline industry that increasingly grew complicated to manage and expensive to operate despite the efforts of the company's colorful crew of pilots, flight attendants, mechanics, and CEOs.

Journey with  Northwest Airlines from its shaky takeoff to its hazardous landing over a span of eight decades. Lavishly illustrated and compellingly narrated, Non-Stop charts the course of an iconic American business.

From Non-Stop: A Turbulent History of Northwest Airlines:

Four decades after D.B. Cooper’s parachute getaway from a Northwest airliner in 1971 — the first such air hijacking in U.S. history — Florence Schaffner was still upset and afraid. The former Northwest flight attendant and recipient of the hijacker’s written demands had taken a long leave of absence after the crime, routinely checked beneath her auto for planted explosives, and feared for her life. Someday he might come looking for her, she thought, or want her out of the way. Those who had turned Cooper into a folk hero — the sellers of T-shirts bearing his wanted poster, makers of commemorative belt buckles, and writers of countless songs in his honor — could not understand how much he had endangered her life and the lives of others. To Schaffner, Cooper, whoever and wherever he was, was no hero. 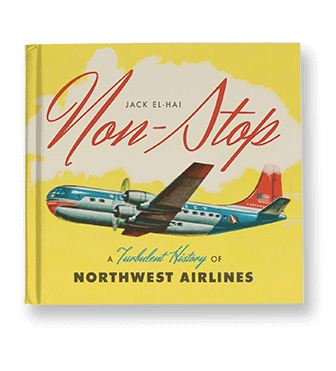 “Jack El-Hai faithfully propels us through the history of a company we all took for granted. From rickety planes delivering mail to one of the largest and most respected airlines in the world, El-Hai lays it out through the highs and lows. At the beginning, heroic pilots and primitive gear, all the way to D.B. Cooper and the Underwear Bomber, the intriguing leadership and crafty politicians, to the final day when the lights went out at Northwest Airlines—all here presented in masterful style.”

“El-Hai’s narrative captures the pivotal business and political moves that allowed Northwest to grow, while also spotlighting the characters and trends of the airline’s history.”

“A concise record of aviation’s race to zoom further, faster and ever more fashionably through the 20th century…. Brimming with wonderful period photographs.”

“A bright chronicle of one of the nation’s legacy airlines…. Full of mid-century cool, this book soars along on a powerful slipstream of nostalgia.”