The Nazi and the Psychiatrist: Hermann Göring, Dr. Douglas M. Kelley, and a Fatal Meeting of Minds at the End of WWII

“If you liked Eichmann in Jerusalem by Hannah Arendt, try The Nazi and the Psychiatrist by Jack El-Hai.”

“Ace reportage on the unique relationship between a prison physician and one of the Third Reich’s highest ranking officials… El-Hai’s gripping account turns a chilling page in American history and provides an unsettling meditation on the machinations of evil.”

The Nazi and the Psychiatrist explores the complex relationship between the American psychiatrist Douglas M. Kelley and his 22 Nazi patients awaiting trial as war criminals in the 1945-46 International Military Tribunal at Nuremberg.  As Kelley develops an especially close relationship with the former Reichsmarshal Hermann Göring, he launches an investigation of the essence of evil that eventually proves to be the physician’s undoing. Set amid the post-war ruins of Europe, The Nazi and the Psychiatrist is the first book to tap Kelley’s vast collection of personal and professional papers and artifacts from Nuremberg — including medical records of the Nazi defendants — which until now have been hidden for decades. 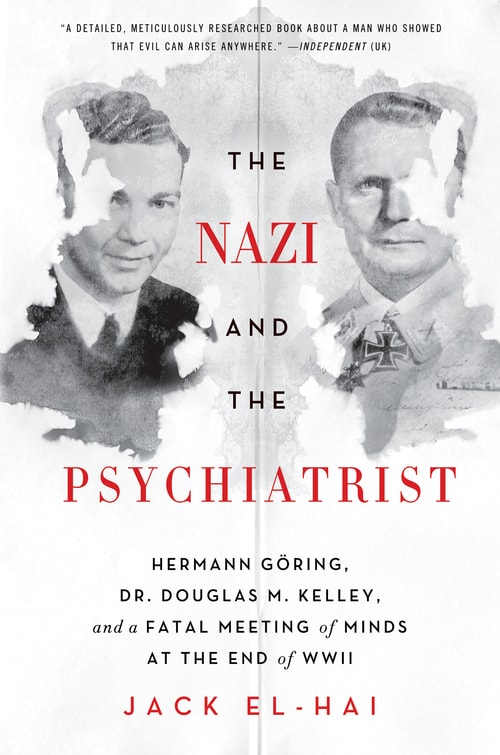 Praise for The Nazi and the Psychiatrist

“The Nazi and the Psychiatrist is a fast-paced, deeply researched psychodrama about an ambitious American military psychiatrist who is drawn into a sick and dangerous relationship with Hermann Göring, Adolf Hitler’s right-hand man and one of history’s most notorious criminals. The story of their terrible, intertwined fates opens a fascinating window into both the criminal minds of the Nazis and the nature of evil itself. This is a truly compelling book.”

- Debby Applegate, Pulitzer Prize–winning author of The Most Famous Man in America: The Biography of Henry Ward Beecher

“In this little known and completely gripping story of the American psychiatrist sent to analyze Nazi leaders following their World War II capture, Jack El-Hai tells of an encounter both scientific and deeply haunting. But more than that, he tells the story of efforts to understand evil—in its most chilling human incarnation—and to overcome it in the pursuit of our better selves.”

- Deborah Blum, author of The Poisoner’s Handbook: Murder and the Birth of Forensic Medicine in Jazz Age New York

“This intimate and insightful portrait of two intersecting, outsized personalities—one an exemplar of public service and the other an avatar of evil—is as suspenseful as a classic Hitchcock film that hinges on an eerie psychological secret. Readers of The Nazi and the Psychiatrist will be riveted by Jack El-Hai’s moving study of how good and evil can converge in a heightened instant and across a lifetime.”

- Andrew Solomon, National Book Award-winning author of Far From the Tree: Parents, Children, and the Search for Identity

“With full access to Kelley’s notes on Nazi psychology, El-Hai infuses his story with the messy, compelling details of people’s lives. These tug the reader inside Kelley’s head for an engrossing exploration of human nature, sanity and despair.”

“A detailed, meticulously researched book about a man who showed that evil can arise anywhere.”

“Journalist El-Hai’s haunting historical account raises questions about the human capacity to cause harm…. In this thoroughly engaging story of the jocular master war criminal and the driven, self-aware psychiatrist, El-Hai finds no simple binary.”

“In the chilling tale of Dr. Douglas Kelley, a young U.S. Army psychiatrist and his secret evaluations of Nazi leader Hermann Göring, Jack El-Hai weaves a harrowing narrative that brilliantly probes the depths of evil. The Nazi and the Psychiatrist is an utterly fascinating book.”

- Gilbert King, Pulitzer Prize–winning author of Devil in the Grove: Thurgood Marshall, the Groveland Boys, and the Dawn of a New America